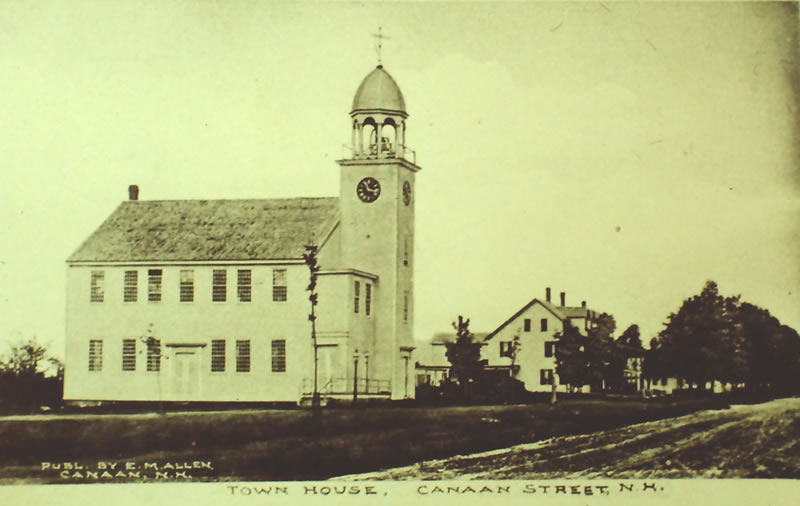 The Unique Heritage of Canaan

The Heritage of New England still plays a strong role in Canaan. We value our history, meeting places, old ways, and lessons from the past.

We learn the meaning of self-reliance and perseverance. We learn that we need to join together to accomplish great tasks. We will fight to overcome seemingly insurmountable obstacles. Education is a critical value for us as is the right of self-determination. We prize ingenuity and innovation while treasuring simplicity. Learning from our heritage helps us to embrace the future.

It was the Canaan Planning Board that drew up the article establishing a Canaan Museum, which was adopted by the March 1961 Town Meeting.

The Museum originated on the second floor of the Academy building on Canaan Street. It opened Saturday, August 19, 1961 with an exhibit of pictures, antique furniture and other items of historical significance. During the Bicentennial weekend more than 30O people attended the opening.

Medora Nutter and Martha Stevens were Co-Chairman for the event. Others who were asked to be on the committee of curators were: Katherine Gordon, Pauline Barney, Constance Burbank, Margaret Eggleston, Karl Nyhus, Joseph Chandler, Col. Philip M. Whitney and Elsie G. Crocker. Elsie, a descendant of Canaan’s second settler, Thomas Miner, was the first president of the newly formed association.

Through the years many changes have taken place. After the library relocated to Canaan Village in 1978, the Museum moved to its present location in Academy Hall. The building was closed in 1979 and again in the mid-1980’s due to foundation work and other various repairs. When the organization celebrated its Grand Re-Opening, people gave freely of their family possessions to be displayed in the town’s museum.

As the Society’s collection increased, it became, necessary, to renovate the old kitchen and back room of the Museum building for the much-needed space. The kitchen was used for years by the Ladies Church Aid on Canaan Street to prepare meals for Town Meeting and numerous other events. This is now the Museum’s History Room. The walls are filled with pictures, articles and other tidbits of Canaan’s past.

The newly finished back room, which once housed a unique “three-holer”, now contains old School desks that predate the Civil War. They were used in this building when it was known as Canaan Union Academy.

The Museum also has the bells from the Canaan High and Canaan Center School, the bench from the Canaan Railroad station, the movie projectors, used in the Town Hall Theatre, a century-old accordion owned by Hiram Blaisdell and a display of science equipment purchased in the 1850s at a cost of $850.00. These are only a few of the articles that comprise the Historical Society’s outstanding collection of Canaan’s memorabilia.

The Canaan Historical Society is working to preserve The George Kimball House. When Noyes Academy was established in Canaan in 1834, it was the first upper level, coed integrated school in the country. Imagine what life was like at the time, how blacks were treated, how they lived, what jobs and education were available to them. Think of parents who dared to send their young children from New York and other cities to lily-white New Hampshire, a strange place, at a strange time, and a huge risk for all.

The bravery of the parents was impressive. After a horrendous trip emphasizing their low social status, the students arrived in Canaan. There they found warm and caring people who believed in the education of blacks and whites. All students were treated the same. They enjoyed months of equality, both in the classroom and in the social environment.

Anti-abolitionists destroyed the school and the students were sent back to their homes, but the short time they had at Noyes Academy was seared in their memories and those memories sustained them. What they learned, academically and socially, led a number of the students to further advanced schooling and long careers of service.

George Kimball was a trustee of the academy and hosted the male students in his house during their stay at the school. His house is the remaining connection that we have to Noyes Academy and its illustrious students. The Historical Society hopes to save the George Kimball House to preserve the memory of the Academy’s students and incorporators.

You can also review the house plans. For additional information, contact CLTownsend@comcast.net.

Do you have a memory of Canaan Life you would be willing to share? Have a suggestion of someone we should record? Please contact the web administrator to be put in touch with a Canaan Museum Curator!

Built in 1798 and first known as Gilman’s Tavern (a colonial stagecoach tavern), the original building consisted of the main house with a barn creating an ell structure. But around 1890 this lovely was converted to the Lucerne Hotel. The Lucerne was owned by the Weeks family, and subsequently given to their adopted son, William Hinckley, who had a reputation of being a wonderful and accommodating host and proprietor. In 1908, Mr. Hinckley had the large barn moved to a nearby location where he continued to use it as a livery stable. In its place a new and extensive two-story ell was constructed which included a number of additional guest rooms, a kitchen, laundry, and bathrooms. With the expansion of the hotel and the fact that it was located on Canaan Street Lake (previously known as both Hart’s Lake and Crystal Lake), the Lucerne quickly became a popular summer hotel. Parties on the lawn, musical entertainment, swimming, hiking, croquet, tennis, and golf were just some of the ways you could spend your days there.

In the 1940s the home was converted to accommodate the Cardigan Mountain School (an all boys prep school which is now located just down the road). Later, from the mid 1960s to mid-1970s, it became the campus of a tiny liberal arts college called—appropriately—Canaan College. It was later bought by a family who has since used it as a primary residence.

The old North Church of Canaan