In 1792, the people living in Canaan started construction on a Meeting House just off of what is now Canaan Street Lake. It was complete in 1793 and still graces the common on Canaan Street and serves as a focal point for the Canaan Historic District. The Meeting House is managed by the Town of Canaan under the guidance of the Meeting House Preservation Committee.

A set of historic theatre “curtains” (a grand drape and three backdrops) were found in the attic of the Meetinghouse. The curtains had water damage and had been cut from their top boards and off the old wooden rollers.

They were examined by Christine Hadsel and M. J. Davis of Curtains Without Borders, Inc., a VT-based nonprofit that surveys for and conserves historic painted theatre curtains. Afterward, they were rolled back onto the wooden rollers, wrapped for protection and stored at Canaan’s Historical Museum.

The grand drape (this curtain would have hung just inside the proscenium arch) is signed on the front: L. J. Couch & Co., So. Boston, Mass. The back of the this curtain is marked “Canaan, NH” which indicates that the set was purchased for use here in Canaan, and most likely on the Lyceum Hall Association stage on the second floor of the Meetinghouse (beginning in about 1884).

Canaan’s grand drape is a scene of Chateau Chillon, a romantic image that was popular because of Lord Byron’s poem, “The Prisoner of Chillon.” The backdrops include a country scene, a street scene and a fancy interior. Levi J. Couch hired skilled artists and these are beautifully painted using water-based pigments on muslin.

Canaan, like most of the towns in New England, had an active interest in theatre from the 1880s through to about 1940. Local productions, musical evenings, traveling shows, and graduation ceremonies were just some of the events that would have taken place on stage either at Lyceum Hall or at the halls in the village. Other than a later curtain that hangs hidden on the back wall of the Senior Center’s second-floor stage, the set found at the Meetinghouse is Canaan’s only remaining piece of historic stage equipment.

It’s hard for us to imagine, now, the impact that such large paintings had on an audience when the curtains were new. They were admired then and today they are a link to Canaan’s cultural history.

For more information about historic stage curtains, how they were made and the artists who painted them in New England (and beyond) and about the conservation work of Curtains Without Borders, Inc., see www.curtainswithoutborders.org. For details about this set of theatre curtains, contact Judith Kushner, 523-4337.

Students in Portfolio Art work all year to create “a cohesive body of work.” They must mount a show and write an artist’s statement as their final culmination of their year. Their work is shown in conjunction with the Indian River Middle School Art Show.

Each year, students at the Canaan Elementary School study colonial history and artifacts from earlier eras in the classroom.

They then re-enact colonial activities, including games and crafts such as quilting and candle making, on the Meeting House Green. 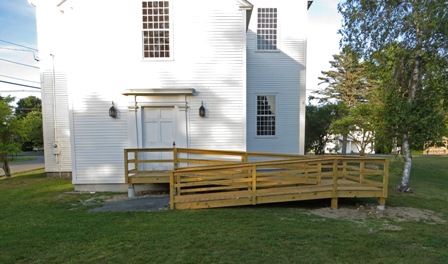 THE FUTURE OF THE CANAAN MEETING HOUSE

Over four decades ago, a small group of neighbors became concerned about the poor condition of the historic Meeting House. A permanent Meeting House Restoration Committee was created and, in 1975, a preliminary plan of action was drafted. Through the years, tens of thousands of dollars have been contributed by charitable foundations, state historic organizations, and gifts from individuals and families like yours.

With the initial restoration done, a new permanent Meeting House Preservation Committee has been formed with the charge of advocacy for the preservation and maintenance of the Meeting House.

Restoration will be an on-going effort. The Meeting House is a priceless old building that will continue to need help above and beyond what the town will be able to provide. It is clear we must establish a long range reserve fund to preserve and protect the Meeting House. As the building ages, we must be prepared to assess and plan for future needs. The recent failing of the tower was a lesson learned.

We can’t wait for an emergency to hit; we must be proactive. Just as Canaan responded to the needs of the Meeting House over the past thirty seven years, we hope you will respond in kind to the present opportunity for participation in this historic cause. Trish Brown’s efforts raised $8,000 for the repair of the tower kick-starting our latest fund raising drive. Contributions over the last few years now total $20,000. Our fund needs to be large enough to weather future storms.

Rules & Application for Use of Meeting House

To request meeting space in this building, please contact the Town Administrator at townadmin@canaannh.org or 523-4501×5